A Place Where Rice is Grown, in Pictures

The Shonai plain in Yamagata prefecture features a rich tradition of rice cultivation. It is here that the Tokugawa shogunate commissioned the Shonai domain to produce its high-quality rice for the new capital of Edo (modern-day Tokyo) in the 1600s. With the help of nearby Sakata port, Kitamaebune trade ships spread that rice all throughout the Japanese mainland, firmly establishing Shonai's reputation as one of Japan's most lauded rice areas.
Throughout those centuries, the practice of rice farming has been handed down the generations from farmer to farmer. And although there are new challenges ahead in terms of an aging population, decreasing rice consumption, and cheap imports from abroad, some of Japan's highest-quality rice is still grown in abundance here.
As someone who moved here from Europe, I had never seen rice farming from up close. Perhaps it is for that reason that I've so come to appreciate the scenes of farmers working their fields so much. This season, much of my time was spent at home thanks to a Covid-induced work-from-home policy. This meant I had the unique opportunity to grab my new camera (Fujifilm X100V) and capture the rice fields nearby my house from up close. What follows is a collection of some of my favorite moments from start to end of Shonai’s rice season. 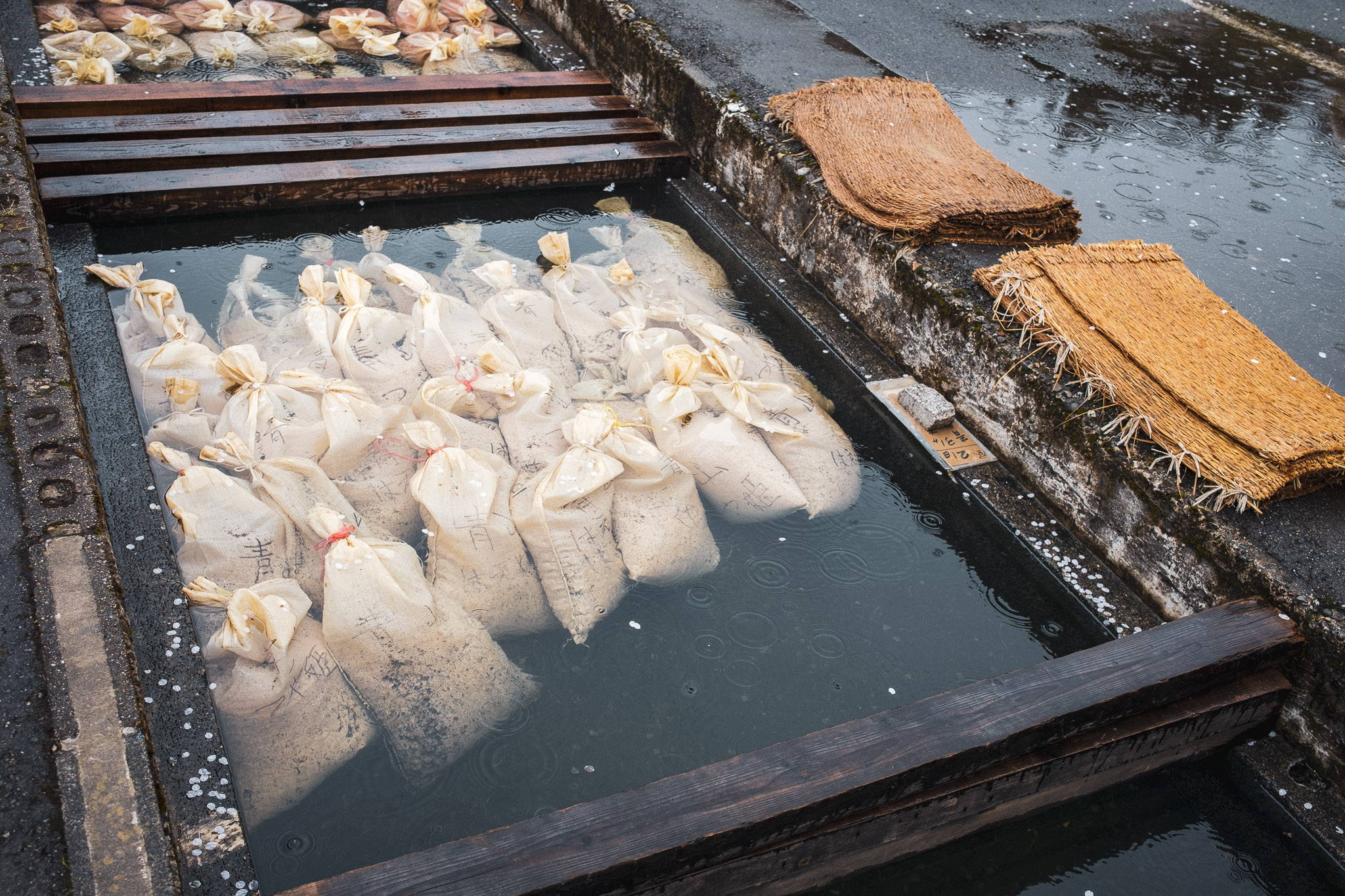 A Bag of Seeds

In the village of Yutagawa, farmers pick up these bags of rice seeds to start the season. My camera arrived on the last (rainy) day of the handouts, after most farmers had already picked up their bags. Only a few remained, never to be picked up. 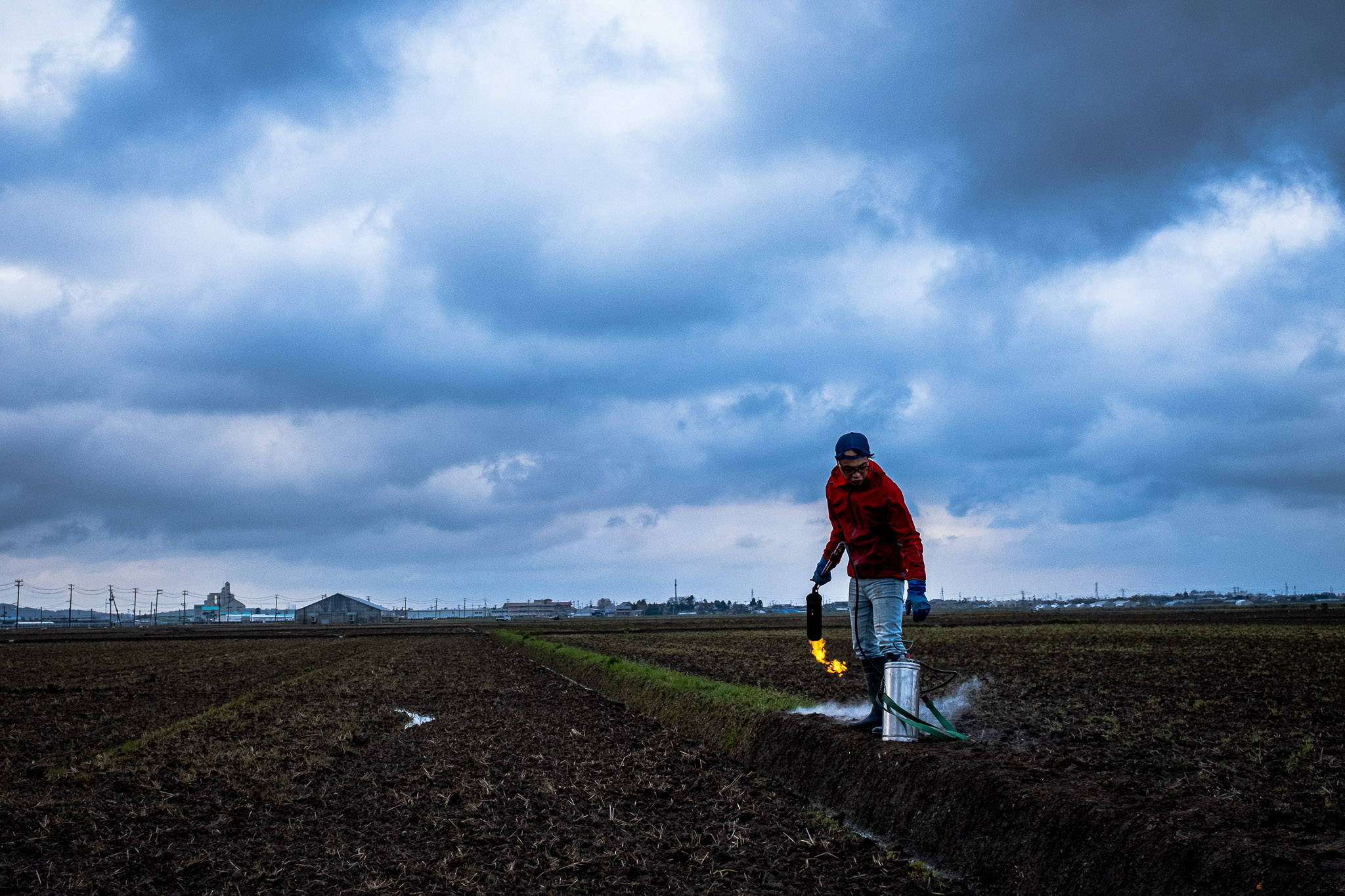 Farmers prepare the fields by plowing and removing weeds. Everyone has their own way of weed removal, though this fellow's scorched earth policy was the least subtle method I've seen thus far. 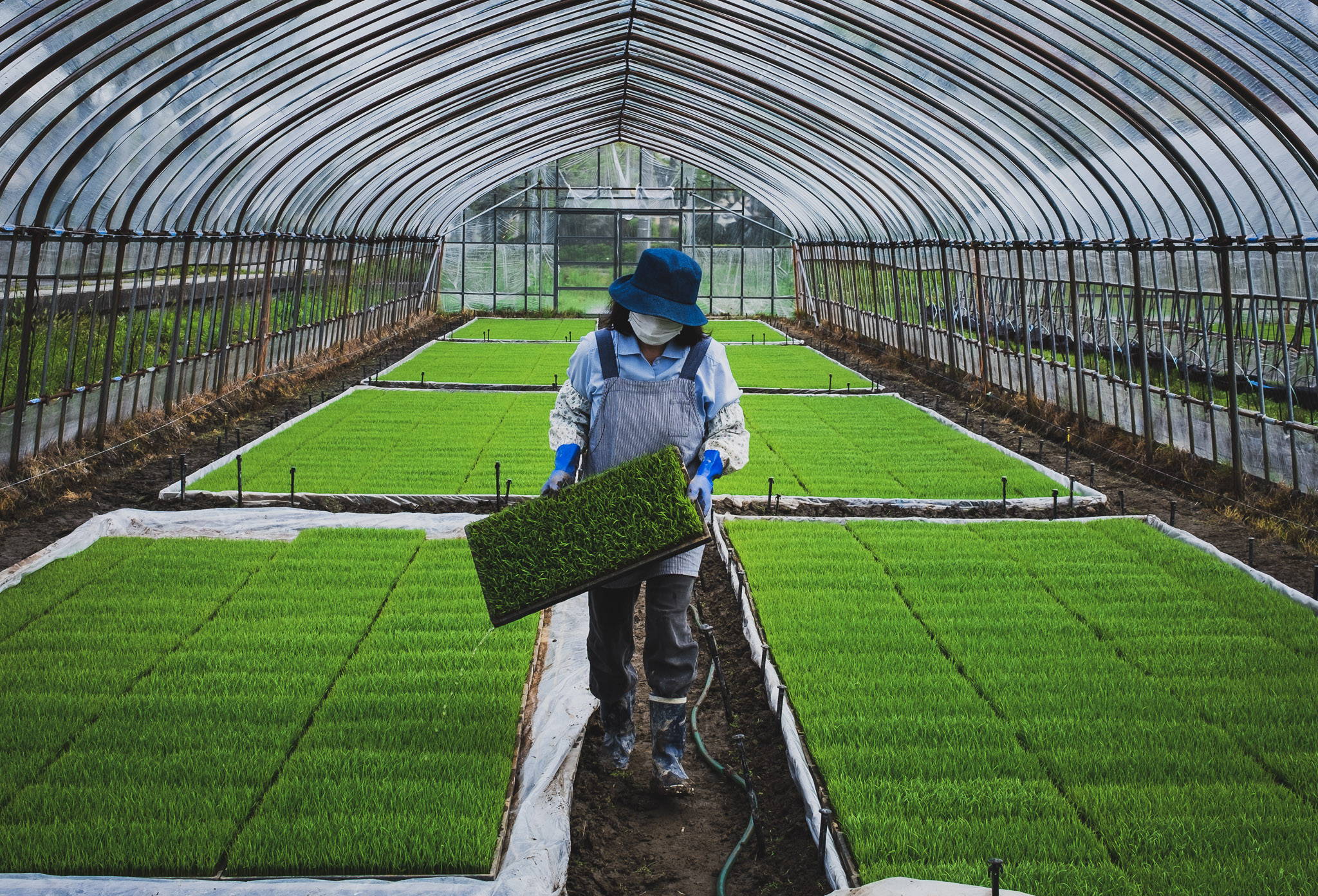 Little did I know that rice plants are first grown in a greenhouse to the seedling stage. Only when they have grown resilient enough to face the element of nature are they finally moved into the field.

Captured on May 4th. 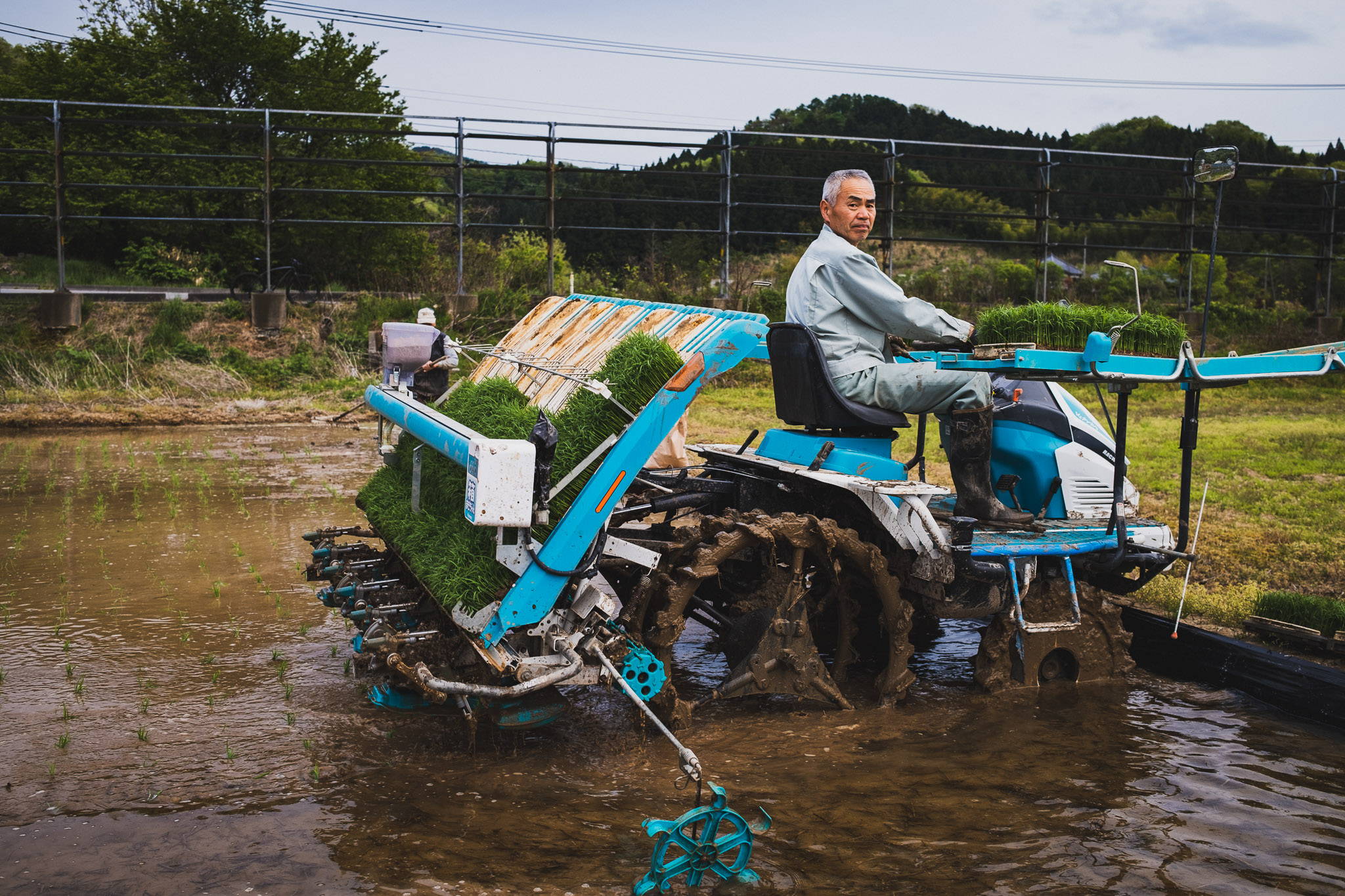 Early May, the farmers of Shonai hop on their Rice Planting Machines to put the seedlings into the field. These are magnificent contraptions of mechanical ingenuity, planting rows of seedlings into the soil with the accuracy of a dozen grandfather clocks ticking in perfect synchronicity.

Captured on May 9th. 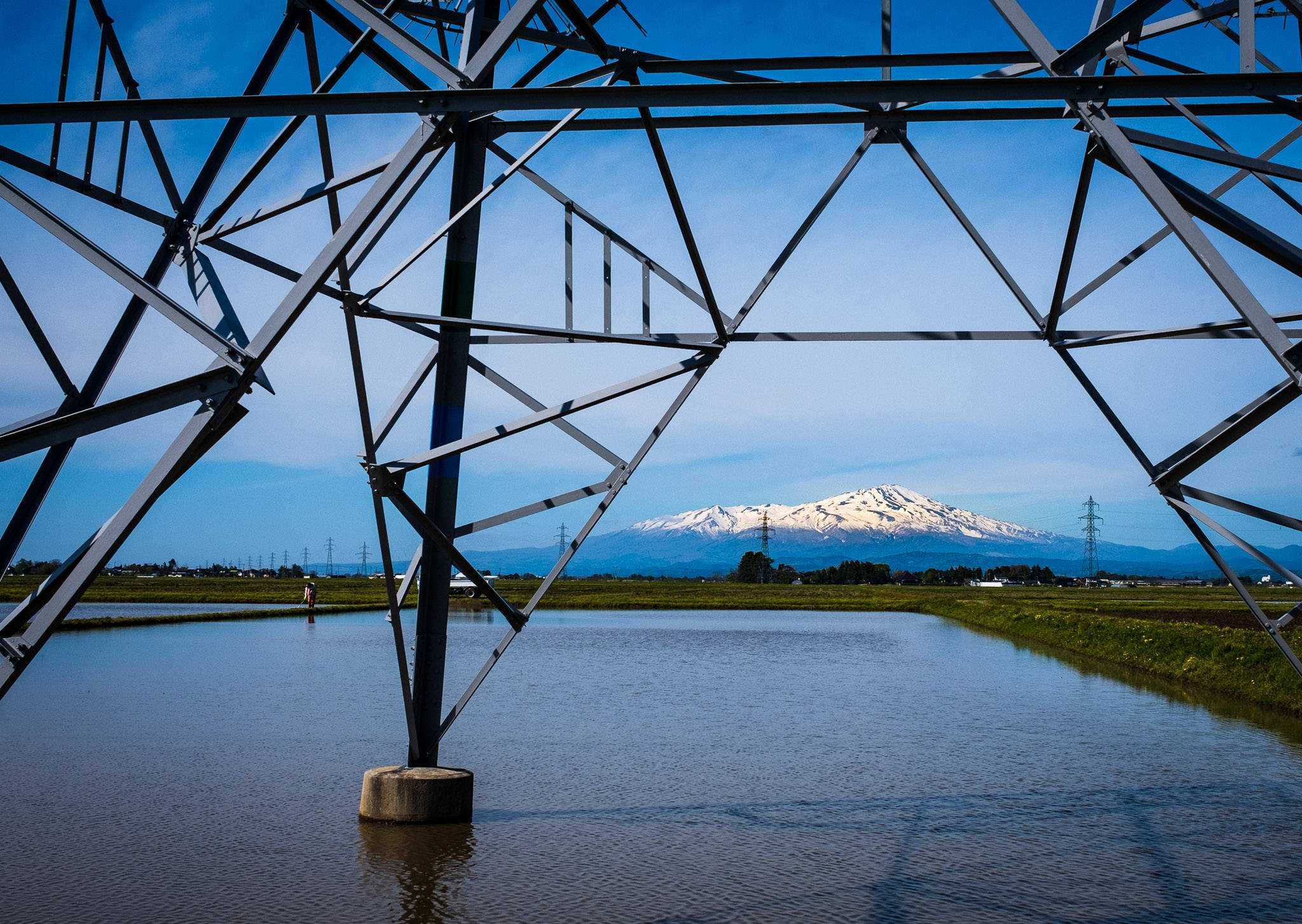 Water is the Key

Irrigation is key for successful rice production. Fortunately for Shonai, meltwater from Mt. Gassan and the Akagawa and Mogami rivers offer rich sources of pure water that are carefully controlled to flood the fields.

Captured on May 13th. 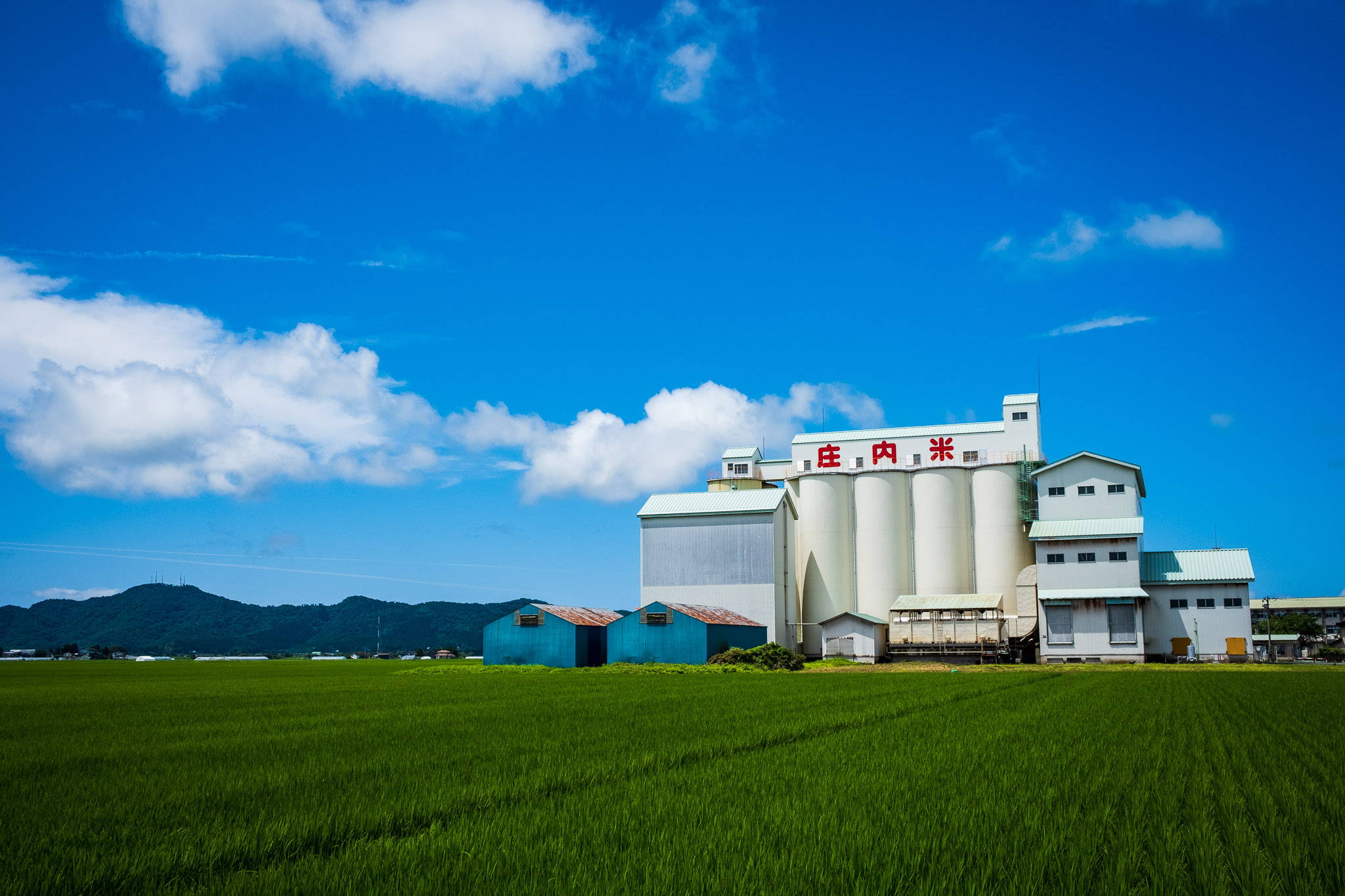 Throughout June and July, the rice slowly grows taller and taller. Once harvested, much of it will be stored in the giant rice silo's that tower proudly above the fields. 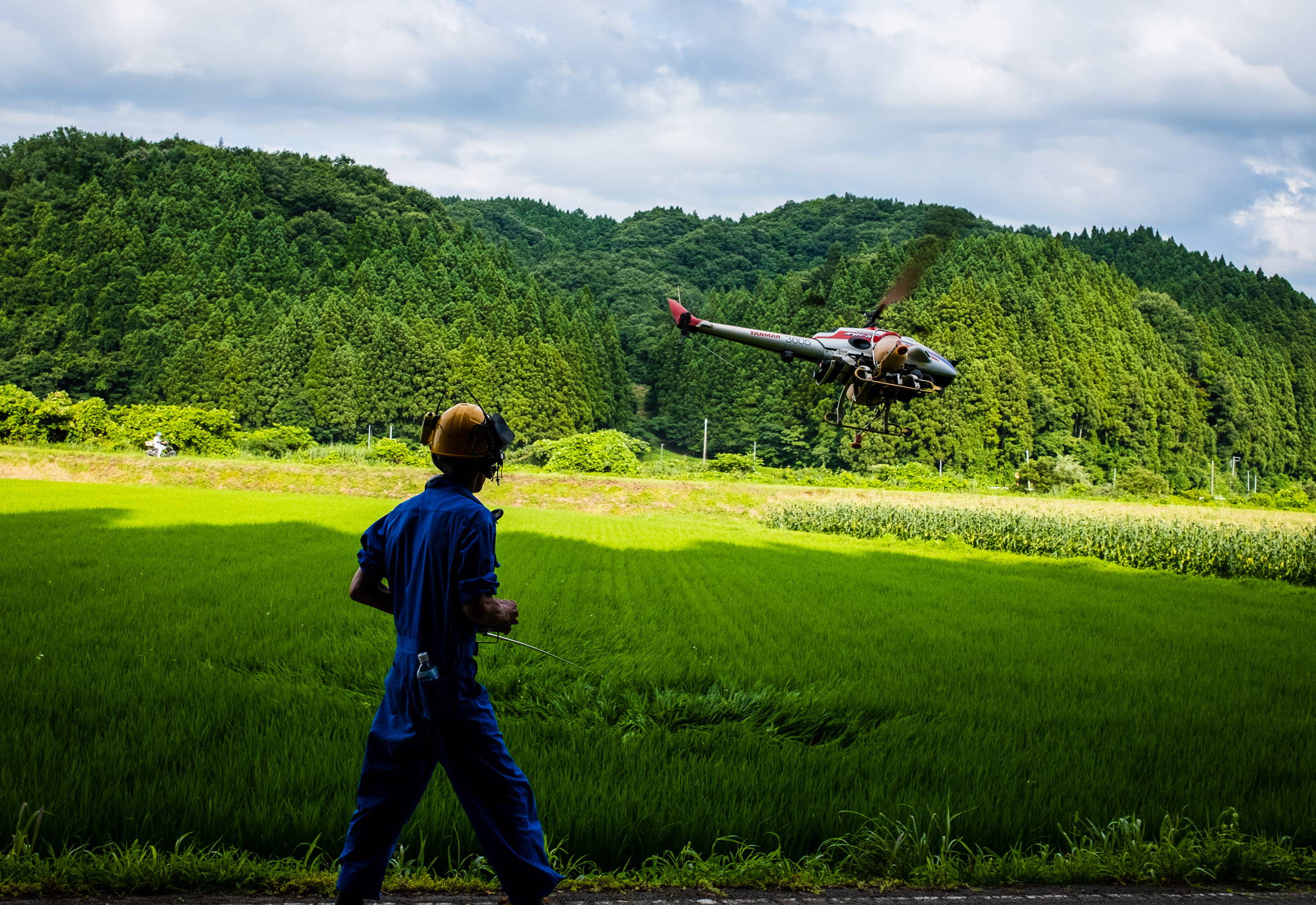 Bring in the Drones

Even out here in rural Japan, older farmers have embraced modern technology to boost yields as much as possible. Although still a relatively are sight, this includes giant herbicide-spraying helicopter drones. 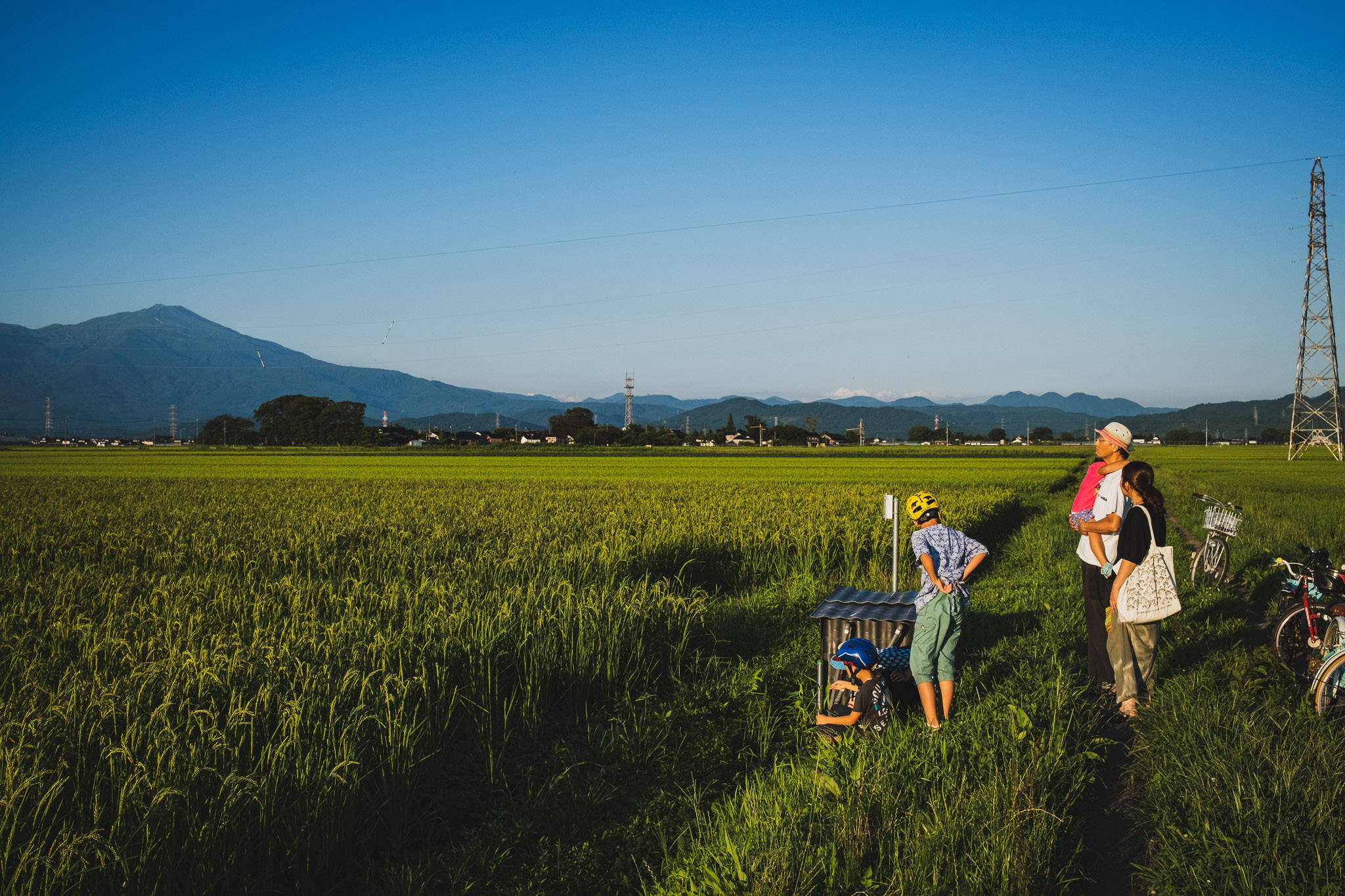 Not all farmers need herbicide-spraying drones however. Our friend Arao-san, for example, grows his rice naturally, and uses no fertilizer or pesticides whatsoever. His yields may not be as high as it could be, but few growers can beat his rice on taste or nutrition. This was our first visit, where we sampled some of his rice for usage in the Shonai Special. 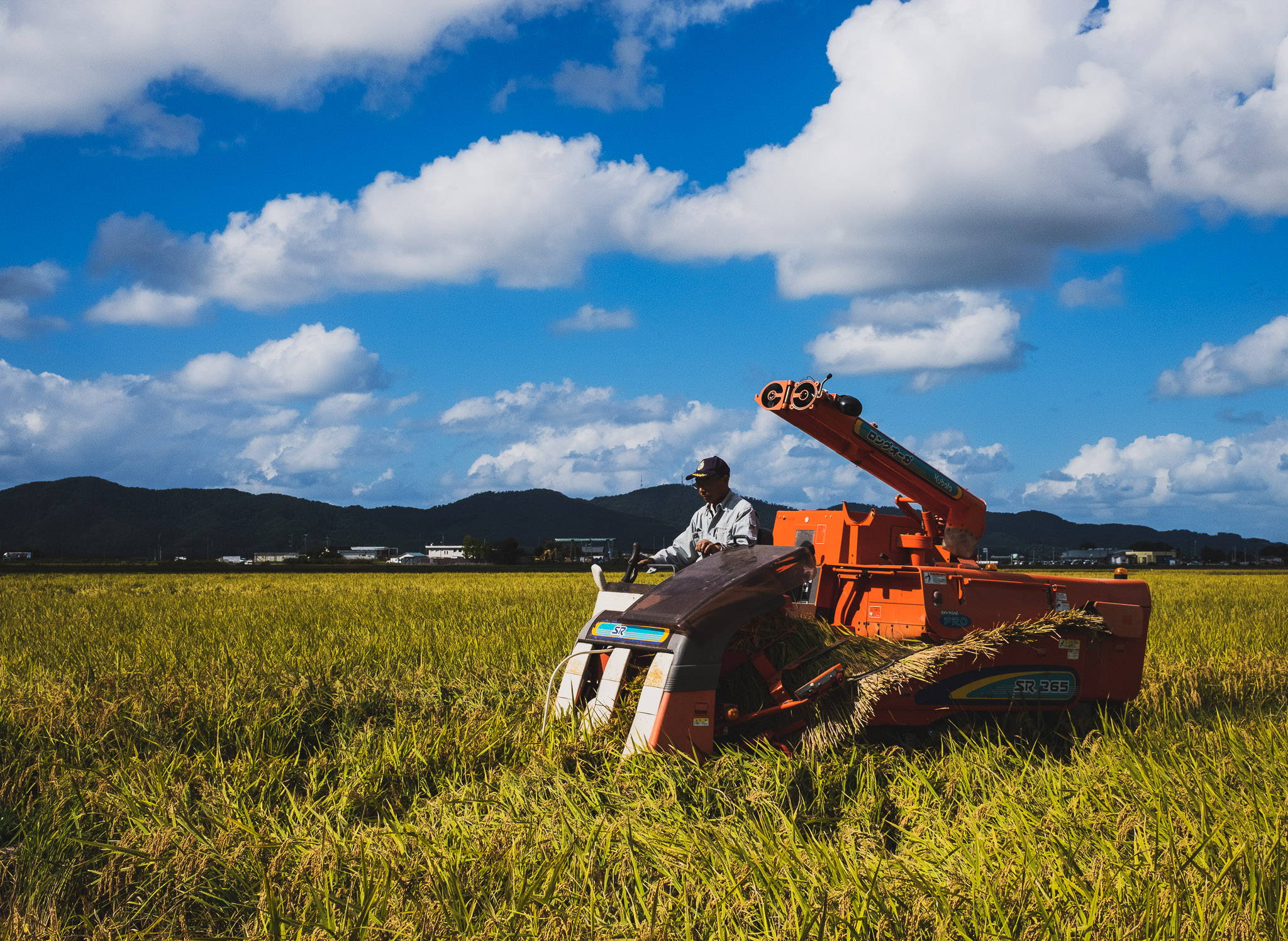 When the moment to harvest finally arrives, it’s these machines that dot the landscape. Like giant beard trimmers making their way up and down for a long-overdue shave, they reap the plants, remove the grains, and leave nothing but a stubble 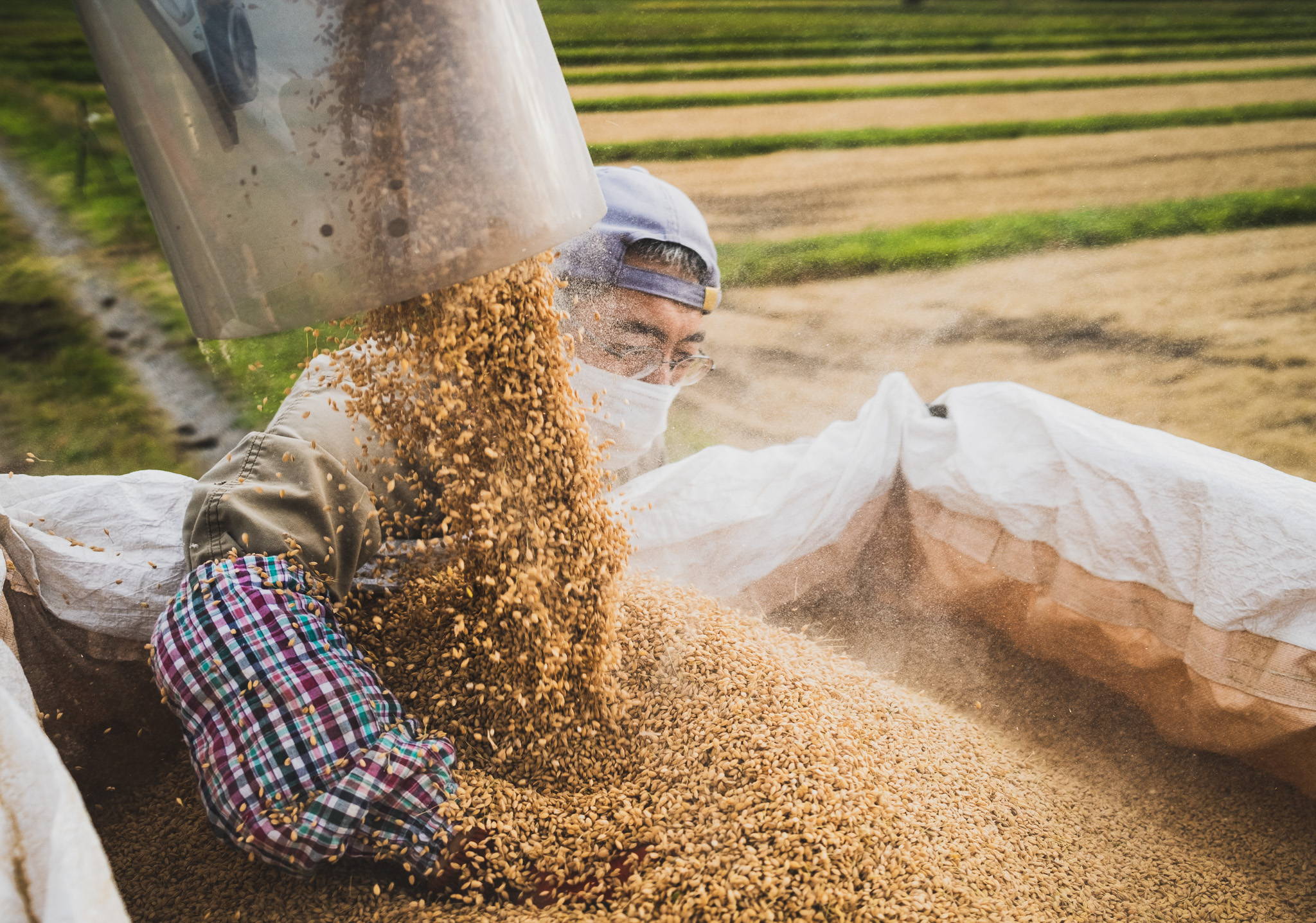 Depending on the size of the harvester, a single run collects roughly one ton (1000kg) of rice grains. Work that can easily take a team of five people days when doing everything by hand, these machines can reap in about 30 minutes.

A Tonne of Rice 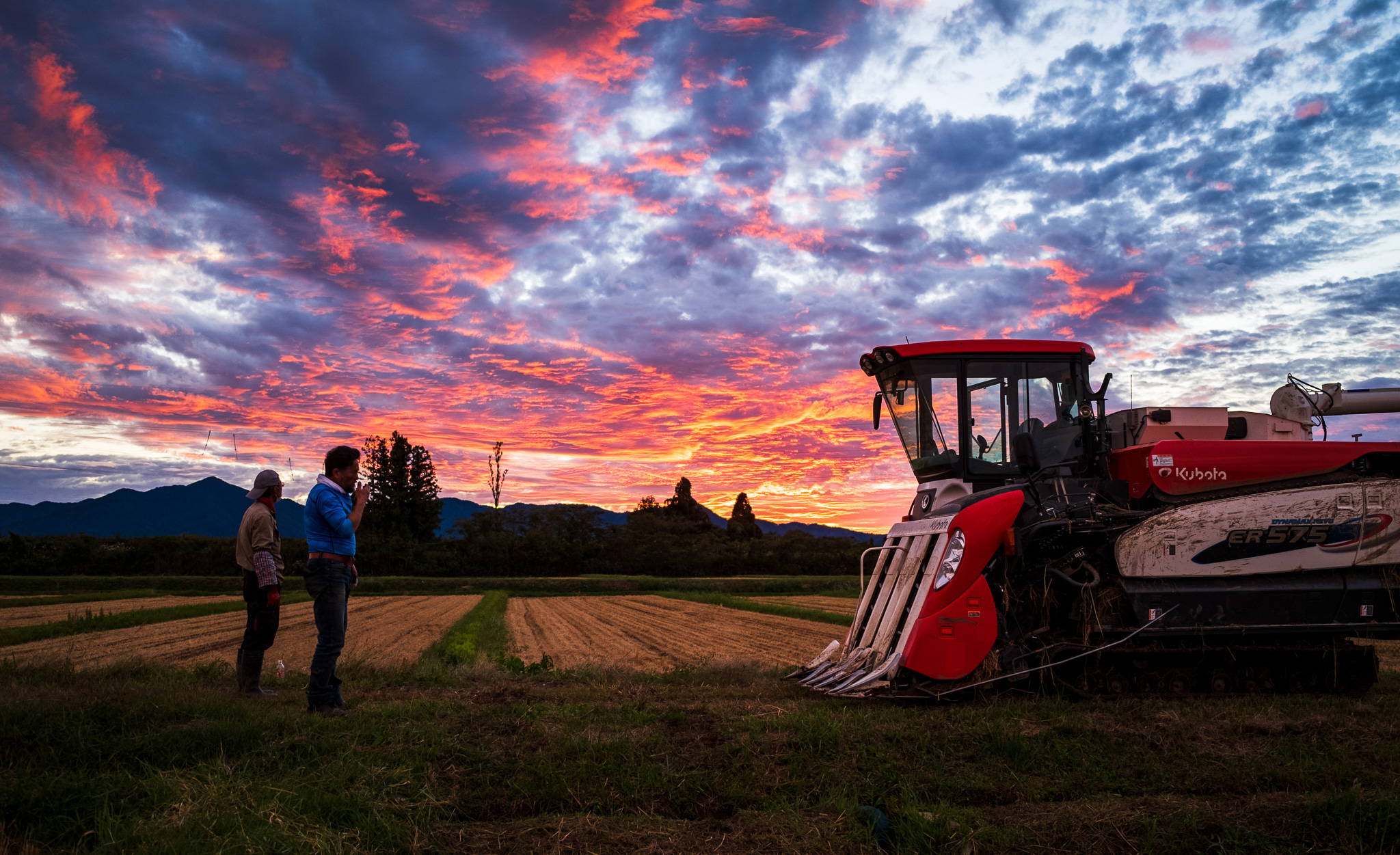 Although the average farm size here is small (a mere 2.4 hectares), harvesting all those fields still requires long days of work from dusk till dawn. This is hard, but satisfying work. 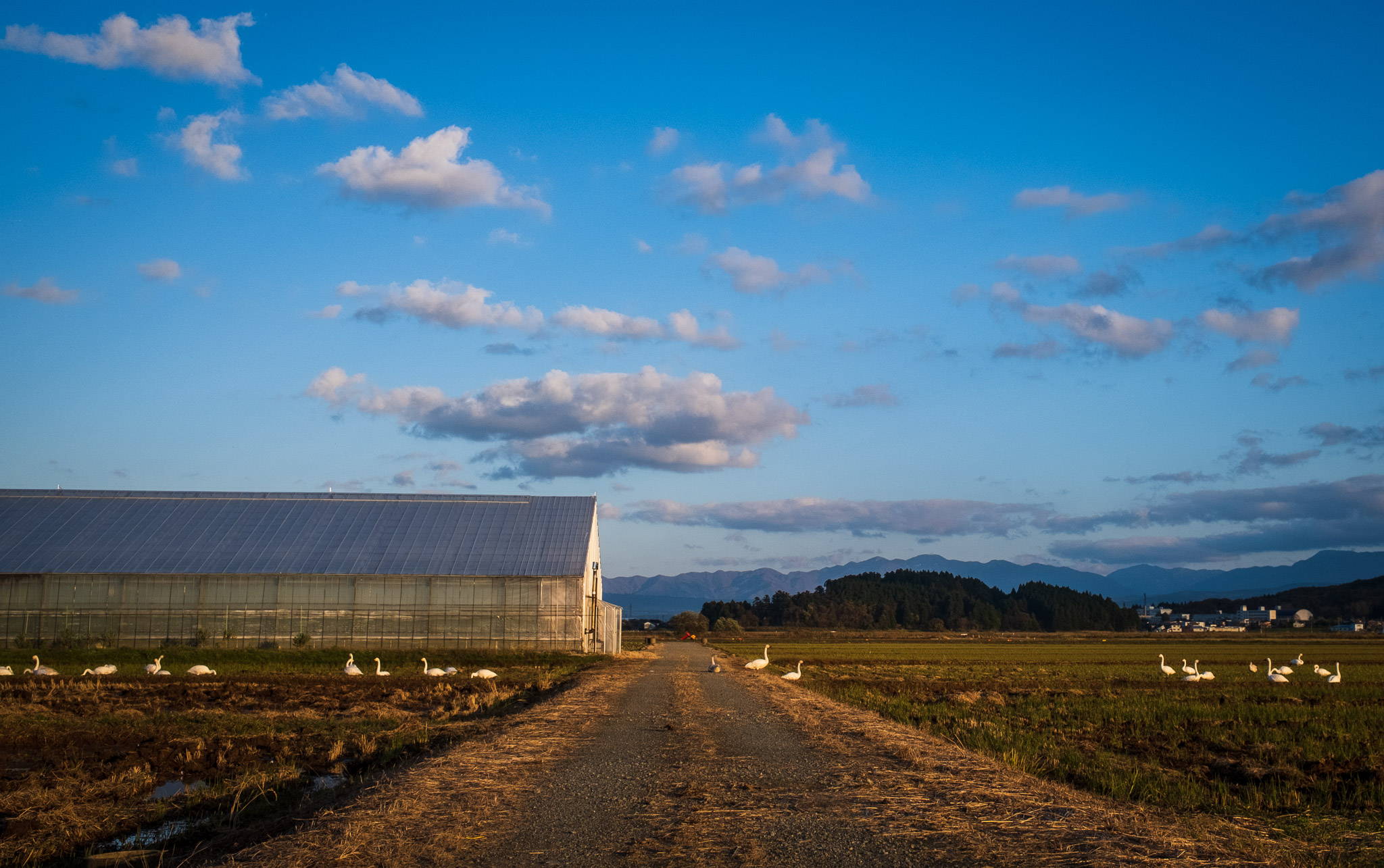 After the plants are gone, the rice fields lie fallow and bare. That's when the geese arrive - having migrated all the way from Siberia to spend the winter in Japan and to feast on insects and left-over grains.

Enter your email and receive 10% off your first order.